Dandelions! (thanks to powi)

Finals, studying, and anxiety. Who needs that? Not I! Kudos to http://winemaking.jackkeller.net/dandelio.asp for recipe #2. Picking the dandelions was the easy part. For dandelion wine, you need to pull the green part off of the bottom. That process took me an hour and was much less fun that plucking dandelions.

After the dandelions were leaved (yes.), I threw them in a pot to boil. After boiling, they were left to steep for 2 days. Today I brought them back to a boil and mixed in some grated orange peels. They boiled together for 10 minutes.

Afterward, I poured the mix through a cheesecloth into a tall gallon pitcher. I was afraid I wouldn’t have enough room in my glass gallon jug for the sugar, gallon of water, and extra orange juice. I ended up pouring some of the then-dandelion-tea off into the sink. It turns out that enough water boiled off in the process that I could have left it in. Next time I’ll trust the recipe!

After cooling, I poured in the juice from the 4 oranges referenced in the recipe (the same oranges I grated.) I transferred that whole mix into the glass gallon jug and waited for it to cool down. Yeast needs warm water (but not scorching) to come to life, so once it cooled down, I poured the yeast in and waited 20 minutes. A little bit past that, a foam on the top began to form: 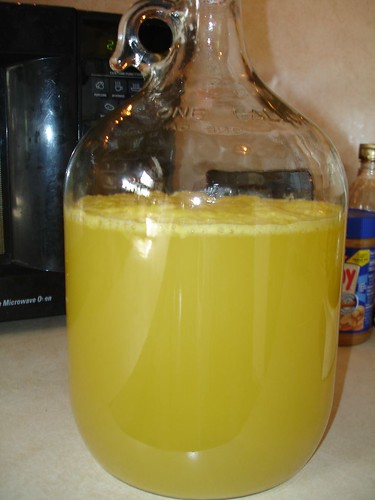 The yeast is ALIVE!

Finally, I strapped a balloon to the mouth of the jug. I poked small holes that let the carbon dioxide out slowly. I can still see the balloon inflate slightly, letting me know how active the yeast is. 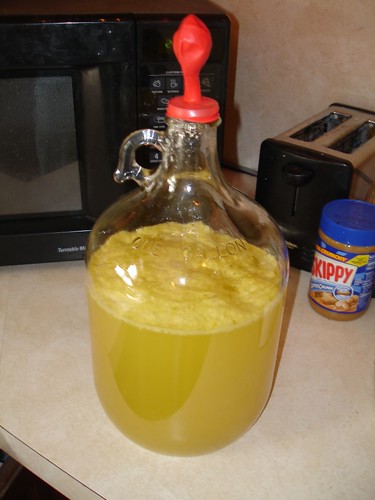 Lastly, somehow this got onto the jug. I’m not sure what part of the recipe it was, but it happened. 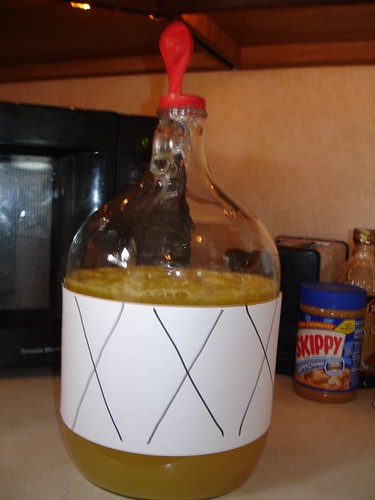 Actually, the X's were indicators of the strength of the alcohol, from one 'X' to three. (http://en.wikipedia.org/wiki/History_of_alcoholic_beverages#Colonial_America)

I’ll let you know how it tastes! For now, back to studying. Cheers!