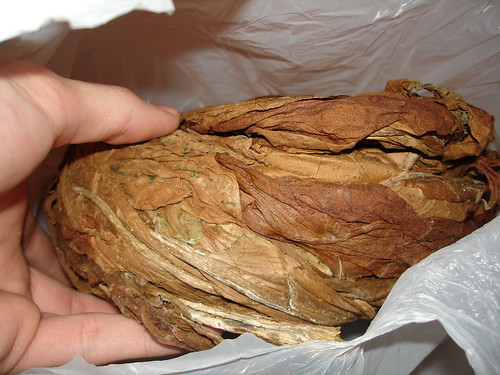 A bundle of tobacco leaves. Also known as a "hand" of tobacco.

The first hurdle was getting the unprocessed leaf. Besides ethics and age-verification, unprocessed tobacco should be easy to sell. For instance, the USPS recently released a statement barring customers from shipping cigarettes or smokeless tobacco. Unprocessed leaf falls outside of the definitions for nonmailable tobacco, making it perfectly legal to ship:

Some people are hesitant to move into the unprocessed tobacco leaf market regardless of the above. Find the ones that aren’t.

I found my provider and purchased a pound of tobacco leaf. 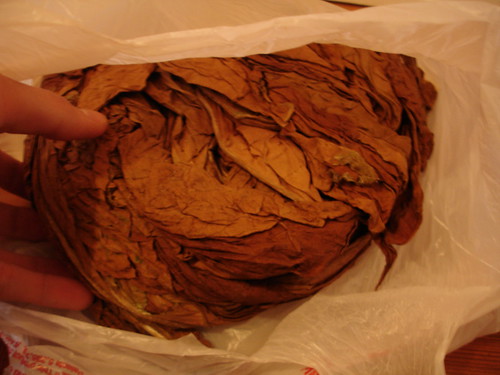 It came wrapped in a plastic bag to keep the moisture in.

Specifically, I ordered the #16 cigar leaf. It’s grown in Pennsylvania and is praised for being a great filler, binder, and wrapper:

I never realized how big tobacco leaves are. 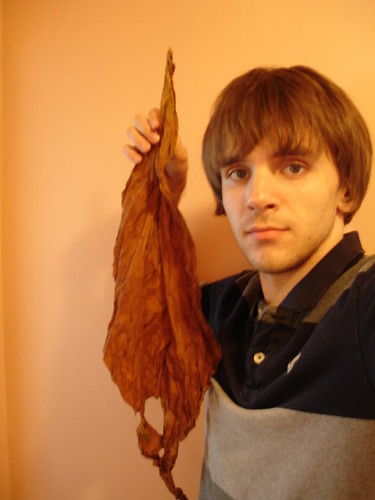 This is before they're rehydrated.

(For those interested in a step-by-step guide, feel free to check out my Instructable on the topic.)

I assembled my workstation: scissors, a rolling pin, some leaves, Gum Tragacanth (alternatively, clear pectin or flour paste,) a sheet of E-size paper, and a spray bottle filled with water. I was live-tweeting the process at this point. 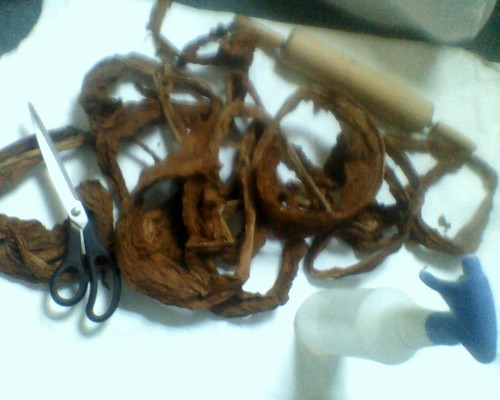 The paper protects my carpet.

The leaves needed to be brought back to a pliable state, so I misted them with water. After letting them relax for a few minutes, I began to pull the leaves into their full shape. I used the scissors to cut the middle vein out of each leaf. This leaves (I love you) two halves of the leaf, which are now pliable and ready for sorting. 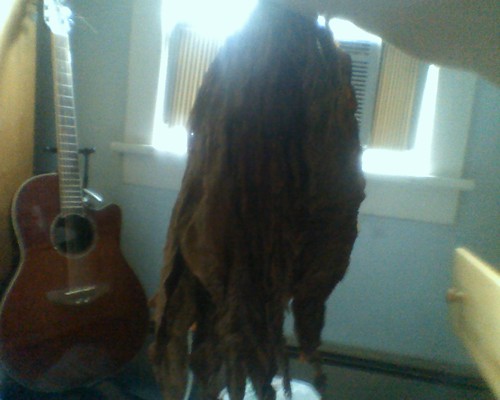 A hand of tobacco after being cut up. Ready for sorting and rolling.

I then sorted the leaf into filler, binder, and wrapper. I went with piles of leaves with small holes (filler), non-hole leaf (binder), and pretty leaf (wrapper). I wasn’t sure how to start, so I bought a cheap cigar and [ripped it apart] reverse engineered it. It confirmed the steps for me and proved that the YouTube videos were accurate. The rolling pin was used to flatten out the wrapper; this minimizes the appearance of veins and makes it easier to wrap with. It looks nicer in the end too.

Making a cigar is intuitive, but the process lets you know how long it could take to become proficient.  The simplified mechanics go like this:

The art of shaping the filler, or wrapping the binder tight enough, or getting the wrapper to look right takes time and experience. It took around three hours total to make these: 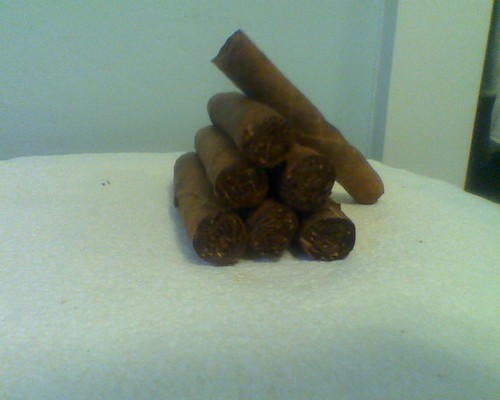 A pile of cigars

There’s a whole slew of things that are done differently in the real world. A chaveta is a special knife used to separate the leaf from the center vein, and in the real world filler leaf is held in cigar molds to force the shape to stay. These leaves were air-dried and not fermented, whereas most places put the leaves go through a fermentation process. There are a lot of variables. There is a lot of room for innovation.

I smoked the first one weeks later and it tasted great. I rolled it too tight though and threw it out at the halfway mark. I ordered seeds at the same time I got the leaf, and planted my own crop. That post is next.