Read “Growing Tobacco in New Jersey (#1)” if you’re interested in reading about my first attempt at growing tobacco. 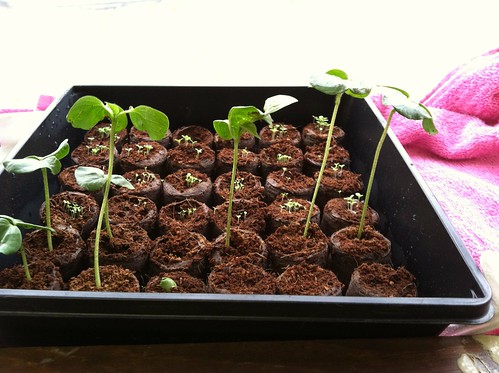 The plants in the front of this picture are cotton and didn’t last long before being consumed by my cat. I wanted to make a cotton pouch for my tobacco. 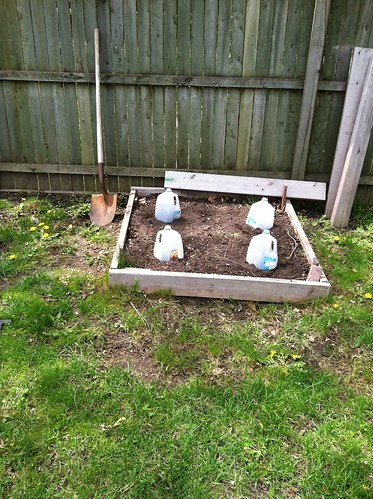 7 weeks. The tobacco goes outside when it looks hardy, which is usually after a couple weeks. The milk jugs give them protection while they get used to being outside. 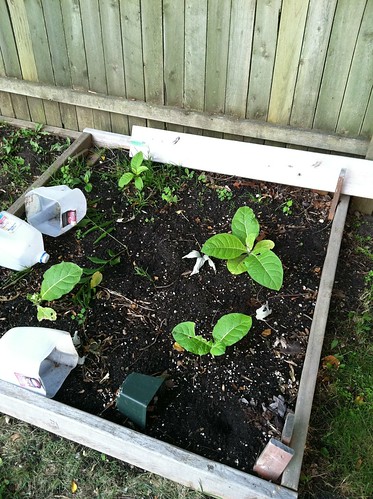 12 weeks. The soil in my wooden container has manure mixed in. I’m afraid of using pesticides. 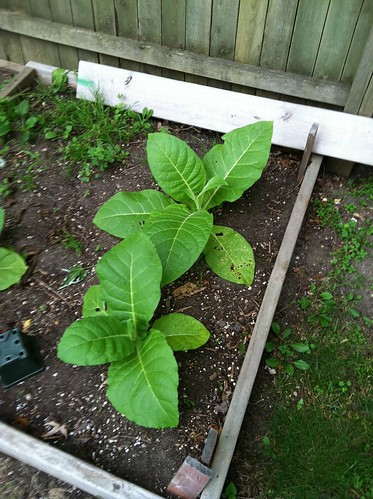 Watching the plants outgrow the milk jugs is great. They’re riding a bike for the first time. 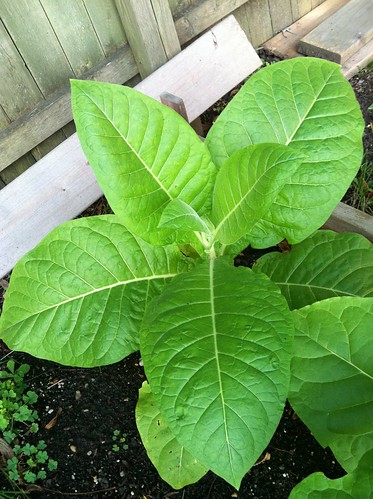 15 weeks. Tobacco grows quick. I fought the clovers in the background all summer. 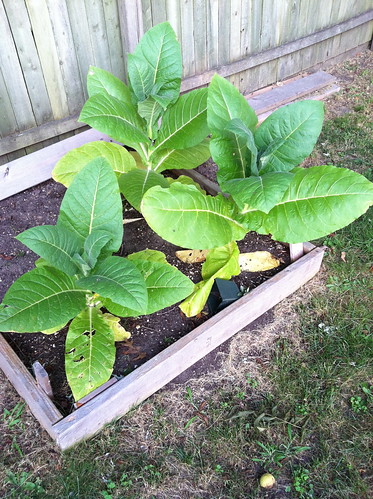 17 weeks. I still have bug problems in July. The top of the plant looks healthy, so a few sacrificial bug leaves are fine. 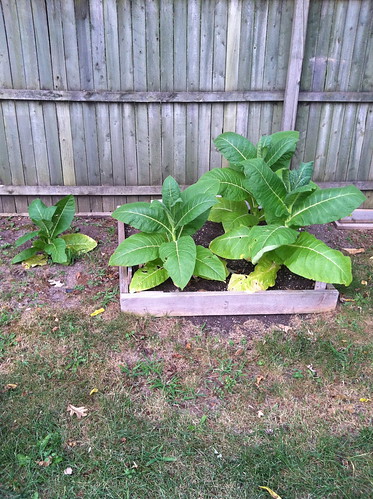 The plant on the side is the orphan of the bunch. I reserved the back-left corner of the box for the only cotton plant that lived. The cotton plant was eaten by squirrels shortly after. 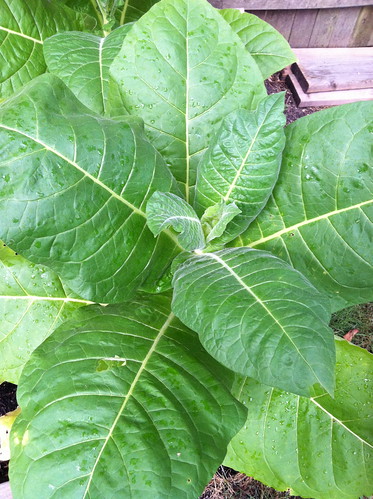 The rain is almost frequent enough to keep the plants fed. Stressing the plants does them good, so I wait until the leaves start to droop before giving them water. The leaves perk up after an hour. 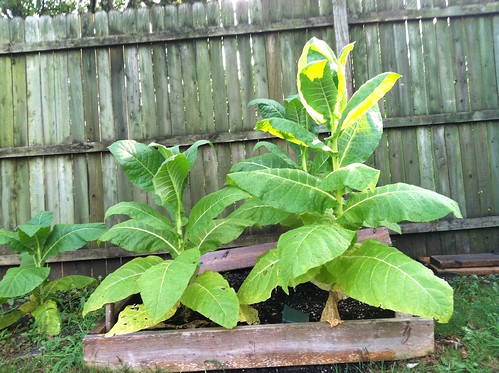 22 weeks. The older leaves are getting their heft now. I’ve noticed that bugs tend to choose the same leaf to stick with, so I leave them around for the sake of the plant. They’ll only eat the leaf if it’s still attached. My decoy leaves never worked. 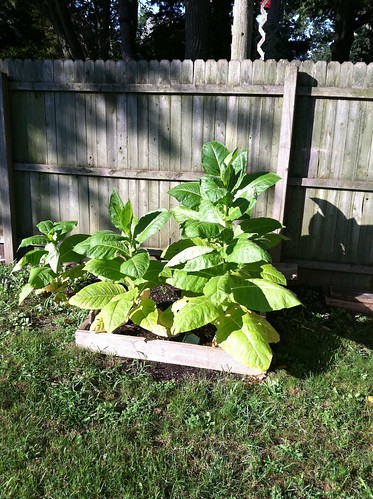 Seeing the plants cast shadows against the fence is a gratifying feeling. 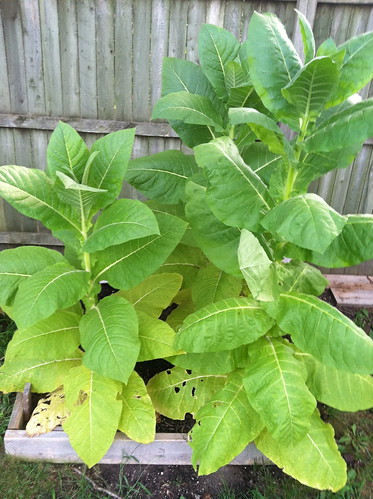 August 26th, 2011: The leaves on the bottom are sacrificial.

24 weeks. This is the point in time where the plants really get their height. New leaves are cropping up every day. The new ones are at the top, pointing upward. 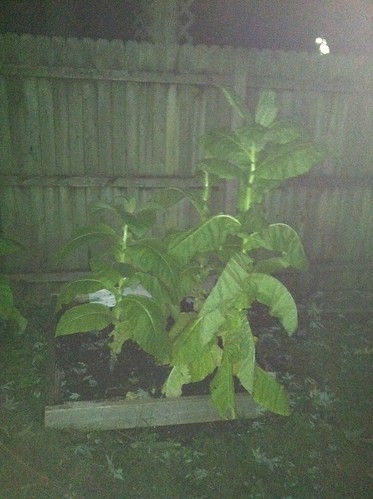 I’ve always known that storms are a nightmare for farmers, but never understood like I do now. Hurricane Irene hit New Jersey on the 28th, which is when I was forced to relocate to a friend’s house. I prepared the plants by placing heavy polyurethane cans at the roots. I also pushed the dirt down around the bases. A large tobacco plant is a boat with many sails. 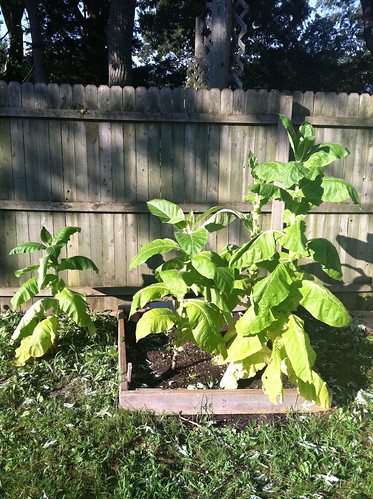 The storm passes. I push the roots back into the ground. The leaves drooped for days and the plants are now at a permanent angle. 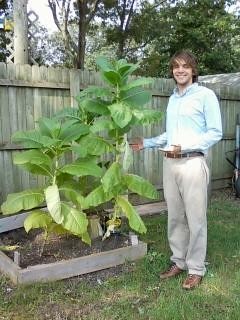 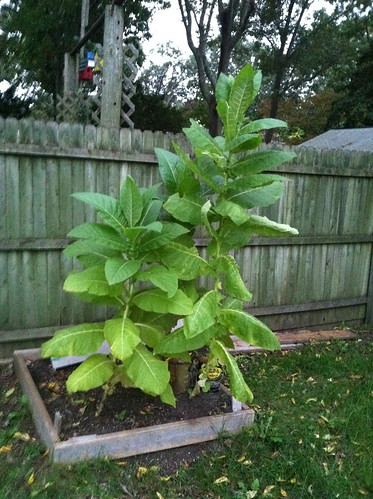 Last year I pulled every leaf from my plants on November 3rd. This year I promised myself to let the plants live until they died, harvesting along the way. It’s an experiment. 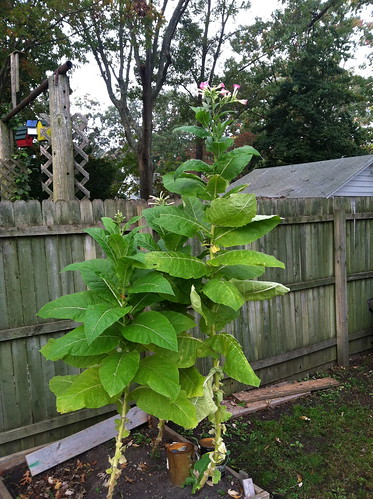 31 weeks. October was a beautiful month for me. My plants flowered for the first time. I have too many photos of every flower. 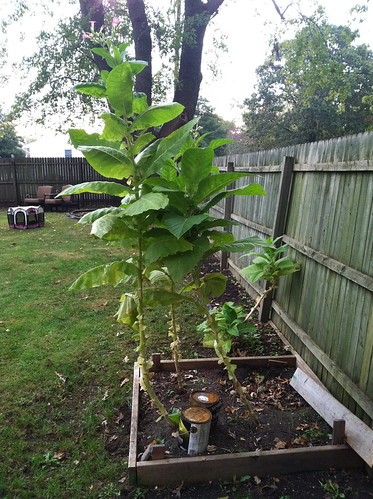 October 18th, 2011: Stripped the bottom leaves to give the top ones more power.

My sister gets her hair trimmed once a year to promote growth. I strip the bottommost leaves. 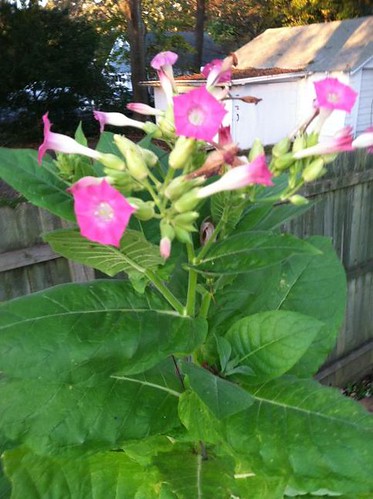 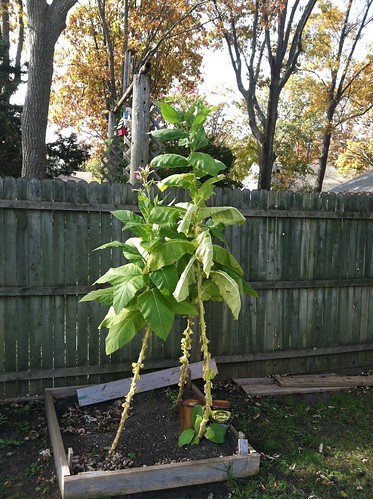 November 6th, 2011: You can see the poly cans from the great storm.

34 weeks. They’re at the point where I pulled them from the ground last year. The problem with growing tobacco in New Jersey is the duration and heat of summer. The leaves don’t get enough time to yellow. They end up drying badly and make terrible cigars. The plants are intertwined. Like a mother, I had unwavering hope for the orphan plant until this picture. Everyone knew but me. 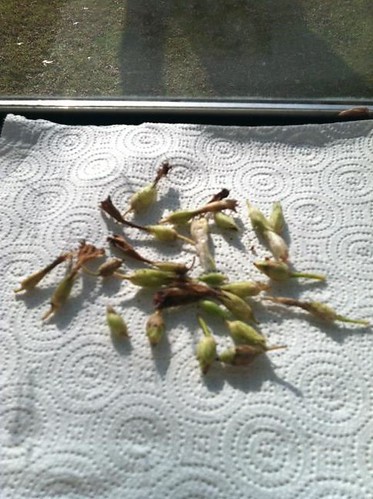 38 weeks. I have seeds for this year that I am ready to plant! I plucked these down when they started falling from the plants. The leaves have been completely harvested and are hanging in the same shed as last year. I’m feeling ready to roll last year’s leaves into cigars at this point, and am beginning to plant the third harvest now.

You can see the full-sized photos in the gallery on Flickr at: Second year of growing tobacco in NJ